This past summer I had the pleasure of doing an internship in the department of Academic Heritage of the VU library. Under the guidance of Liselotte Neervoort I collaborated with other students, artists and curators on making the exhibition Cabinet of Wonder.

The aim of the exhibition is to showcase the many wonderful research collections in the VU depots and archives which usually never see the light of day. We wanted to create curiosity and a sense of wonder within the observer, to not only show them the many strange, interesting and beautiful objects the VU has but to also challenge them to think critically about the context, historical and current meaning and value of these objects. The concept was inspired by the so called “Wunderkammer” of the 17th century. 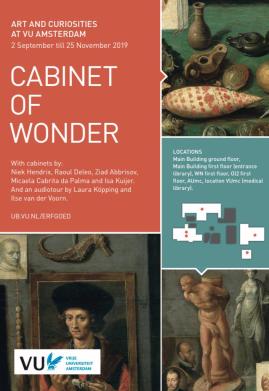 Several students created their own cabinets with a variety of themes, choosing different regions as an overall theme and curating their cabinets with objects from the collection to fit this topic, leading to fascinating explorations of wilderness, the depth of the oceans, and globalization to name a few.

Instead of creating my own cabinet I decided to make an audio tour to go with the exhibition, but I didn’t want to go down the usual path of “explaining things to the observer”. I worked together with a close friend and amazing writer, Ilse van der Voorn, and together we came up with the concept of a series of Scientist’s Diaries.

We got to dive into the depots of the university and rummage through centuries old encyclopedias, plants, taxidermy mounts and animals in jars of formalin. This was a  fascinating and inspiring experience. In the end we chose a few of the objects which stood out to us the most and fit into the cabinets of the other students as a focus for the chapters of the tour, of which there are eight in total. Thanks to

the VU Campusradio we were able to make use of a professional recording studio in which we produced the audio tour. We collaborated with talented voice actors amongst which one of our own VU scientists and one of the artists created wonderful pieces which fit the overall theme and are also on show.

Through the audio tour we tried to bring the objects to life. These tours blur the lines between fact and fiction and are first and foremost meant to entertain and appeal to the observer’s imagination, but also to contextualize the objects by bringing a critical perspective into our fictional stories by choosing environmental, futuristic, colonialist and at times slightly dystopian undertones.

The exhibition is still on show throughout the VU buildings until the 25th of November. I highly recommend that you wander across the campus, take a look the cabinets and scan the QR codes with your phone to listen to our audio tour. The full tour can also be found on the website of the UB.

Click here for more information about the exhibition, and to listen to the audiotour. 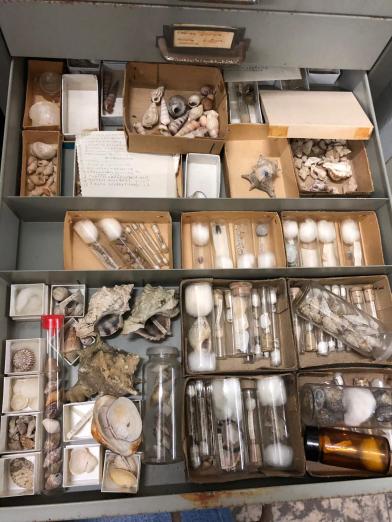