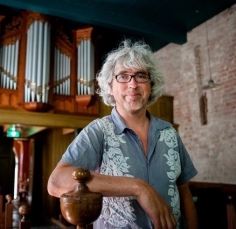 Looking back & and an invitation: join the lecture/workshop on samba on Tuesday 16October with Jean Kleeb and Nadine Balbeisi (16A00, 16.00h)

One of the highlights of the International VU Symposium ‘As Slowly As Possible’ (24-26 May 2018) undoubtedly was the keynote by Wolfgang Ernst, Humboldt University Berlin. Ernst opted, as Katja Kwastek summarizes in her blog on the inspiring symposium, ‘for a process oriented ontology as opposed to an object oriented ontology, arguing that time is rather a human invention to come to grips with various forms of processuality […]’.

Invitation: Samba on Tuesday
It is exactly this focus on process that is the backbone of the honors course ‘Music: Listening & Philosophy’, developed by VU’s chair Organ Studies since 2013. The course is taking place for the fifth time now, and is actually planned to end with a ‘big bang’ next Tuesday, 16 October: keyboardist Jean Kleeb (Germany/Brazil) and vocalist Nadine Balbeisi (Jordan/US), from the band ‘Viola di Samba’, will give a lecture/workshop mainly focussed on perception of rhythm – in order to try and explain, referring to the ‘process of music’, why some musics ‘work’ and others just don’t. Anybody reading this is warmly invited to join this class. It takes place in the Church Hall and starts at 16.00h. 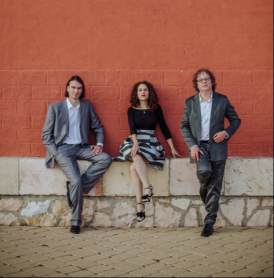 Artistic Research
Focussing on process means rethinking music, as it shows that it is not mainly about composers and musicians, as common wisdom has it – especially in the West. Instead, it starts ‘at the other end’: it is the listener’s intentions that count first. To quote 20th century composer Luciano Berio: ‘Music is anything I listen to with the intention of listening to music.’
Music: Listening & Philosophy therefore aims at integrating academic research and artistic research. To train their compentences regarding the latter, students are confronted with musics they never heard before, invited to make music themselves together, as well as to rethink their own musical taste by presenting their favorite mp3’s to their peers – with the assignment to convince the group why that music would be so impressive.

Academic research
In order to hand students tools to articulate what they learn this way, the course introduces them to relevant philosophy. For example by having them close read Susanne Langer’s famous text on music in her seminal book Philosophy in a New Key (1942). Langer addresses the question what it is that makes artefacts actually works of art and suggests taking listening to music as a strategy. Students also viewed the short movie of Jacques Derrida discussing philosophy and time, questioning the ‘presence of the present’. They met the complex ideas of ‘sound (art) philosopher’ Salomé Voegelin as well, who explores how time works in sound: ‘Sound narrates, outlines and fills, but it is always ephemeral and doubtful. Between my heard and the sonic object/phenomenon I will never know its truth but can only invent it, producing a knowing for me.’

Remarkable
Remarkably enough, the average 30 students that attend Music: Listening & Philosophy are basically future physicists, psychologists, and surgeons. Art students seem less interested so far – which is partly (if not exactly) why I thought it a good idea to mention the course once here.