Written by Katja Kwastek and the MA students from our Kunst, Markt en Connaisseurschap program.

Last week, the MA specialization Kunst, Markt en Connaisseurschap went to London, a study trip which is a core part of the program. Despite the UK being about to leave the EU, London is one of the best places to study the canonical Western European art, but also has a vibrant scene of contemporary art, which is close to global in scope. The best part of the excursion are definitely the close readings / extensive presentation of signature works of art history in situ: from Holbein’s Ambassadors via Manet’s Bar aux Folies Bergère and Seurat’s Bathers at Asnières to Rothko’s Seagram Murals. Testing viewpoints from which to contemplate Holbein’s skull, trying to characterize brushstrokes of Seurat or spatial solutions of Manet remains fascinating.

[1] Maaike Wiggers presenting Holbein’s Ambassadors at the National Gallery.
[2] Maud Maas at the Courtauld Institute, presenting Manet’s Bar aux Folies Bergère. Visiting the Courtauld Institute was the highlight of the week for Maud, since the institute is relatively unknown to the larger public, so it was a quiet space to study the great collection.
[3] Babette Claassen presenting at the National Gallery on Seurat’s Bathers at Asnières.

Next to the main museums (National Gallery, Tate Britain and Tate Modern, Courtauld Institute) we also visited exhibitions, from an overview exhibition on the collection of Charles I (most of which from the private collection of the Royals) via an exhibition dedicated to just one year of Picasso’s oeuvre and another one on the photography of Andreas Gursky to an exhibition on Mark Dion including a bird’s aviary and one on the work of Joan Jonas, who also gave a performance in the Tate Tanks herself – reenacting her own signature performance ‘Mirage’ at age 82… 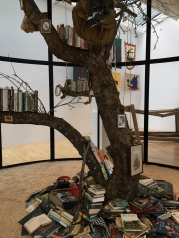 [4] Probably Liza’s highlight of the week, visiting the photography exhibition of Andreas Gursky at the Hayward Gallery.
[5] Inside Marc Dion’s ‘Theater of the Natural World’ at Whitechapel Gallery, a favourite of Nina. Whitechapel Gallery is located close to Shoreditch, where she also did a streetart tour!
[6] Video works of Joan Jonas at Tate Modern. Katja and Joost even went to a performance where Joan Jonas herself reenacted an iconic performance of hers.

Last but not least, we went to both Christies (preview ‘British and Irish Modern and Contemporary Art’) and Sothebys (preview ‘Modern and Contemporary African Art’ and ‘Prints and Multiples’), and to the Bond Street galleries of Hauser & Wirth, Sprüth Magers, and Zwirner. Profiting from Joost Bergman’s extensive experience as art adviser, we had intensive discussion both about individual artworks, styles and techniques (how spontaneous are Picasso’s brushstrokes in the end? / how does Francis Bacon’s style change from rather minimalist early compositions to more heavy later ones?/ why is Claude great as a landscape painter but less so if it comes to figures?) and about practices of collecting, market dynamics, etc. (what do we think of the fact that such an incredible number of high quality masterworks, including a whole series of murals by Mantegna is in private possession of the Royals and thus rarely visible to the tax paying public? Can we assume that the Gursky photographs are exhibition copies and thus not included in the limited print run established for each work?).

[7] Works of Lorna Simpson at Hauser& Wirth Gallery. One of Maaike’s highlights of the week was the gallery tour we did and that we visited both established museums as well as lesser known institutes.
[8] Babettes favourite part of the week: visiting both Christie’s and Sotheby’s, two iconic auction houses which we couldn’t not see with the MA program we’re doing. This photo shows some of the Modern & Contemporary African Art which was on view at Sotheby’s.