Each year, Sven Lütticken teaches a MA course on Art Criticism, in which the students learn how to write critical responses to current exhibitions. This year vuartandculture would like share one of their reviews with you.

For a few months now, the exhibition poster for Camera in Love, Ed van der Elsken’s retrospective currently on view at Stedelijk Museum Amsterdam, has been beckoning people to come see it. The photograph on the poster shows Gina and Sonja Kruiswegt, twin sisters shot by Van der Elsken on the Nieuwmarkt square in 1956. They seem hesitant to pose for the photographer. While one sister looks directly at the camera, the other glances outside of the frame, apparently embarrassed to be photographed. Today, it seems alien to consider that a fashionable young person would be so reticent in front of the camera. The poster reminds us of a bygone era, when Amsterdam was still innocently provocative.

Camera in Love shows a large overview of Van der Elsken’s photographs, as well as excerpts from his film work. This makes it the largest retrospective of his work in 25 years. Depending on where one enters, the first image in the exhibition is a three-metre-tall self portrait that Van der Elsken took of his reflection in a shop window. Perhaps it is presented as a precursor to today’s selfie phenomenon. However, in the context of the exhibition, the photograph introduces Van der Elsken as a photographer of which each photo represents his immersion in the social context of his subject matter. This is most visceral when he manages to capture the subtleties of the weird, and a handful of photos shows these striking moments. Be it a gaunt man in a pink sports jacket, casually lighting a cigarette on Dam square, or yakuza decked out in Hollywood gangster clothes in 1950s Tokyo. He often balances on the knife’s edge between ridicule and respect, which is proof of his skill in capturing what it meant to be provocative. His skill is apparent in the moments when he shows tantalising aspects of sub-culture without becoming fetishistic.

The museum does its best to contextualise the works within their social background. Before the main rooms of the exhibition there is a succession of smaller spaces that show film loops and photographs, as well as newspaper/magazine clippings and publications by or about Van der Elsken. Each room introduces a main moment in the timeline of his oeuvre: living in Saint-Germain-des-Prés during the early 1950s, making Bagara in Central Africa, the world trip with his second wife Gerda, his time in Japan, covering jazz musicians in Amsterdam. The step by step contextualisation that the Stedelijk applies to Van der Elsken’s oeuvre is important when looking at the exhibition. But why choose film snippets instead of longer or even full-length screenings? One would sincerely hope that the “bite-sized videoclip” hasn’t permeated the museum from the smartphone. It’s one of several aspects that reveal the cracks in Camera in Love.

Van der Elsken’s work has become emblematic, leading him to become known as the ‘enfant terrible’ of Dutch 20th century photography. So much so, that over time, this raw view on sub-streams within society has become part of a certain stylistic canon; a kind of ‘atmospheric candidness’. However, the clippings of reviews from the 1950’s on his work in Paris show a conservative view of the works. Nowadays, with the nouvelle vague aesthetic as part of the mainstream, it is important to bear in mind that his portrayal of disaffected or rebellious youths received considerable criticism at the time.

During Van der Elsken’s time in Paris’ Saint-Germain-des-Prés quarter, he captured the love story that could be straight from a Jean-Luc Godard feature film. However, Godard’s A Bout de Souffle [Breathless] (1960) had yet to come out. Van der Elsken was able to show more than just the romance and perpetual cigarette smoke that would become emblematic for young people in post-war Saint Germain. He looked under the standard veneer of adjectives such as ‘vibrant’, ‘rebellious’,  or ‘romantic’—yet surely these are also attributed to his own series now. Scenes of bars with young people in peacoats, folded over each other upon chairs, have a grittiness to them. So rather than highlighting the romantic side of the images, the room introducing the Saint-Germain-des-Prés series shows an unembellished reality around the photographs. In the film loop, a voice reminisces about alcoholism, the sad story of a love lost, and the sectioning of a young man. Combined with the criticism of Van der Elsken’s series in the newspaper clippings, the room allows for more than just aesthetic appreciation. Only by looking at a particular context can subversive undertones be laid bare. 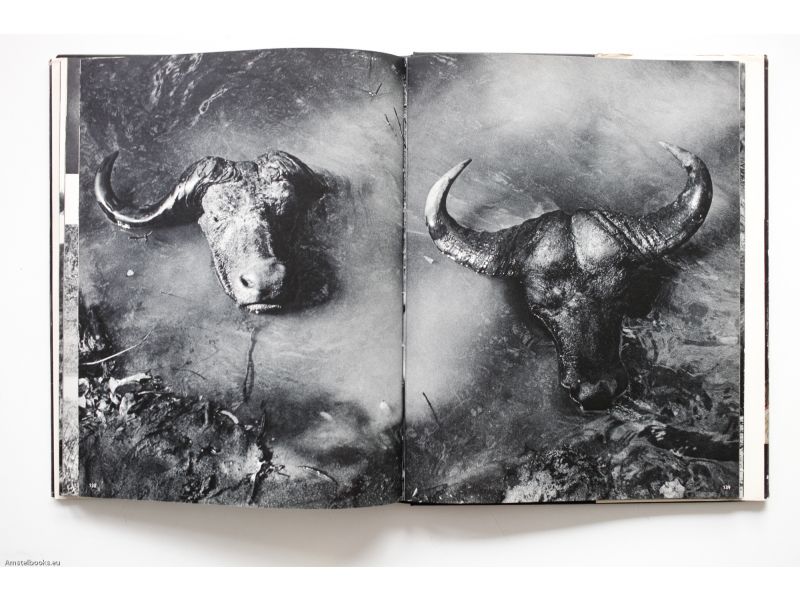 After he rose to fame with his Paris works, the publishing house De Bezige Bij sent Van der Elsken to Central-Africa to make a three-month reportage. He later called the series Bagara, meaning ‘bison’, which he felt captured the wildness and liveliness at the heart of Africa. Obviously, this western gaze is outrageously problematic and illustrates the impossibility for a white European photographer to immerse himself in the Africa he portrayed. He compared the ‘spirit’ of a continent to a wild animal. Here there is no tension between ridicule and respect —the camera is just recklessly in love, to its own disadvantage. This gaze is a smudge on the exhibition. That is not to say that it ruins his work, but it does expose the museum as wanting to make light of difficult issues within the oeuvre. If context is so important for the works, the Stedelijk has the responsibility to present it thoroughly.

On the one hand, it is understandable that the museum shows one of the most influential 20th century Dutch photographers. The beautiful portrait of the twin sisters that is spread across cities in the Netherlands remains alluring. It speaks of nostalgia and familiarity with the weird. However, not only Van der Elsken’s style has become canonised, but so too have the raw, eccentric styles of the people he portrayed been normalised. Over the course of his career, Ed van der Elsken already managed to generate mass appeal for his practice, and yet the Stedelijk manages to make it even more digestible. This makes the exhibition appear to be in a line of win-win blockbusters for museums, neglecting an opportunity to really shed new light on a body of work. Particularly by putting the romantic portrayal of a ‘wild’ Africa on the same level as the portrayal of western subculture. It is a retrospective of photographs now loved, portraying eccentricity now accepted, in a museum that ought to know better.